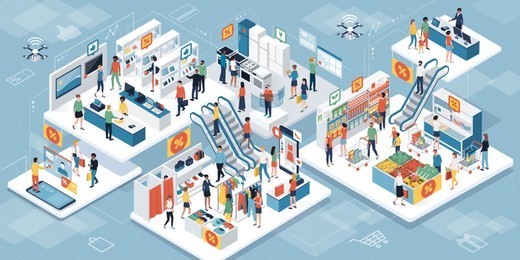 The history of Japan's retail industry

The start of modern retail in Japan can be traced back to the post-World War II. After the Second World War, the development of the Japanese retail industry can be roughly divided into five stages.

The first period was the economic recovery and rapid growth period in Japan. After the war, the department store resumed. Although the government launched the "Department Store Law" to protect the interests of small and medium retail owners, the department store is still blooming in a more rapid way.

The second period is the heyday of rapid economic growth. During this period, the large-scale trading companies and the rapid development of supermarket chains appeared, and Japan gradually entered the "supermarket era" from the "department era".

Nowadays, under the COVID 19 pandemic, offline retail stores, used to be the have-to destination of global tourists, are suffering low footage. Golden seasons such as the Spring Festival season and the Cherry Season have come to nothing. Not to mention the resurge of virus those days, the offline stores have less offline customers. According to data, the sales of Japan's four large department stores in January this year fell by about 30% compared with the same period last year. 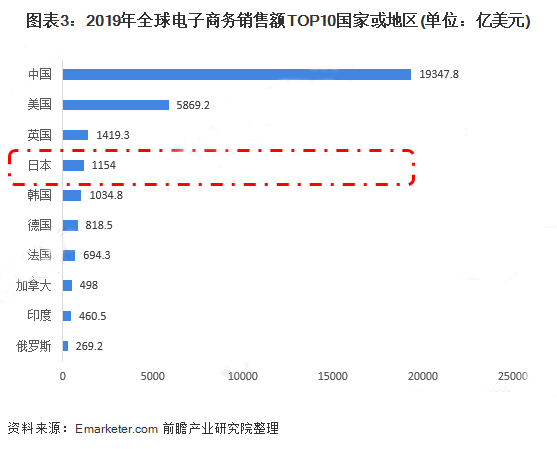 The development of e-commerce in Japan

After the pandemic, the challenges increased for Japan retail industry, such as new changes in consumer values and lifestyles; downturn in economic development and new trends in globalization; and changes in society and industrial structure as well as digital economy. As services such as unmanned cashiers and online ordering continue to become popular, Japanese retailer will gradually increase their investment in digital businesses and promote continued innovation in retail formats.

However, the digital transformation of offline retailer in Japan is not easy. A very important reason is that retail technological innovation has benefited from the development of the Internet industry. In this regard, in the upstream Internet industry, China and the United States are indeed ahead of Japan. Although there are e-commerce platforms such as Rakuten and Amazon (Japan) in Japan, the overall scale of e-commerce is still very small. The reason behind it may be that the competitive advantage of Japanese e-commerce and offline retail is not obvious.

There is no advantage at all in terms of price. E-commerce in China can gain price advantage by removing some middlemen, thereby squeezing the share of offline retail. However, after years of development in the Japanese retail industry, the entire distribution chain has been very optimized, with few intermediate part, and the efficiency of offline retail is very high.

In addition, the cost of logistics industry in Japan is extremely high because of short of labor. Compared with China’s SF and other three delivery company, the logistics cost of JAMATO Japan and Sagawa, the biggest delivery company in Japan, is basically more than three times that of China, thus the online selling price must be more expensive than the offline.

In terms of convenience, Japan has a large number of malls, convenience stores, and supplemented by various self-service vending machines. The convenience of offline shopping makes digital commerce harder than ever. Besides, Japanese pay much attention to the offline shopping experience. This leads to the fact that Japanese e-commerce companies are not developed well.

Although the Japanese were the first to invent QR code payments in the world, they were not interested in mobile payments. In Japan, cash or credit card payments are more common. In addition, the Alipay and WeChat Pay in Japanese stores are basically prepared for Chinese tourists.

In addition, Japan's mature credit services and perfect credit reporting system make them more accustomed to credit card. Of course, they care more about personal information protection, and they are unwilling to log in personal information online, which has also led to the slow development of the internet payments.

In the business process of Japanese companies, the introduction process of smart technology and new technology is very long, basically it takes about half a year, and there are at least 5 to 10 signing nodes, and the development of retail digitalization is promoted at almost every node. Everyone will face difficulties, leading to a very slow progress in the advancement of technological innovation in the entire industry.

Retail industry, the Pioneer in Japan

Of course, in the entire Japanese retail industry, there are still a small number of companies are breaking this barrier and at the forefront of technological exploration, such as Mitsukoshi Isetan, Daimaru Department Store, etc., they are very willing to embrace changes, but how these companies deploy their digital transformation. How did they conquer the challenges?

As the largest department store group in Japan, Mitsukoshi Isetan is not only loved by Japanese people, but also by overseas tourists. It is a textbook for the Japanese retail industry. In order to reduce costs during the pandemic, quickly respond to changes in shopping habit, the Mitsukoshi Isetan Group pay more effort in digital transformation.

In October 2020, Mitsukoshi Isetan formally signed a cooperation agreement with LinkieBuy, and launched the cross-border store Mini Program in December. The cooperation between Mitsukoshi Isetan and LinkieBuy is not only to meet the needs of Chinese consumers, but also to take a fancy to the complete cross-border e-commerce full-link solution provided by LinkieBuy. With the help of LinkieBuy, IT development, E-commerce operation and marketing, store digital management, warehousing and logistics can be solved efficiently, decreasing the invest costs and promoting the implementation of diversified strategies.

Due to the pandemic, the sales of Japanese offline retail stores Daimaru Matsuzakaya have fallen the most, down 34.8%, and the rate of decline has increased since the third wave of the epidemic broke out in December last year. This has dealt a major blow to the strong offline retail of Daimaru Matsuzakaya Department Store. In order to achieve an increase in sales under the normal epidemic situation and restore the strong consumption power that the Chinese market can bring, Daimaru Matsuzakaya Department Store has begun to plan its digital transformation strategy, which has also promoted the development of its online business.

According to Daimaru Matsuzakaya, the development of online China business is an inevitable trend in the development of offline retail in Japan. However, due to the fact that it does not have the ability to operate independently, Daimaru Matsuzakaya has investigated a variety of online methods. In the end, it chose LinkieBuy because of LinkieBuy's rich experience in helping overseas offline retailers complete online digital transformation. LinkieBuy's parent company Xingyun Group is a leading domestic global commodity integrated service platform. Relying on the overseas warehousing and logistics service advantages of XingYun Group, LinkieBuy’s business has covered Asia, Europe, Australia, in more than 110 countries and regions, and it has achieved an absolute leading position in Japan.

From the most basic SAAS store building to customization based on the specific demands of offline retailers, the full-link operation mode provided by LinkieBuy helps Japan stores in digital transformation.